I’ve been quite impressed with the KWA LM4-PTR. It’s heavy, it looks good, it shoots good, and it functions almost identically to the real deal. Even the blowback is on par with that of a small caliber firearm.

So, naturally I wanted to take it to the next level. By making it look cool. I’m no gunsmith, but I figured I could handle these minor improvements on my own. I wound up making quite a few mistakes. But at least it was a learning experience and I have a good looking LM4 to show for it. My misadventures are chronicled below.

The first step was, of course, the rail. I decided to go with a free-floating 13″ rail to get that cool, flat top carbine look. In order to do that, I would also need to replace the gas block (front site) with a low profile gas block. So I bought all these tools, and all these parts, and… then figured out that it wouldn’t work. You would think that a product touted as a “Professional Training Rifle” would be a bit more mil-spec and real steel compatible. It’s close, but not completely.

The threads on the receiver of the LM4 are airsoft specific, which means it won’t accept a real-steel barrel nut. That said, there are free-floating rails purpose built for airsoft guns that can be installed on here. I had just cooled off on the idea by this point and decided to drop in a carbine length rail that I already had sitting around and pursue the SOPMOD (I think) look you see in the pictures. (Which still turned out well and I’m happy with).

But that wasn’t before I had to re-assemble my entire rifle. I had gotten all the way to removing the barrel nut when I found out about our little compatibility problem. If you want to read about the takedown, you can do so at the bottom of this post. But for now we’ll skip all of that and move on.

I installed the UTG U416S 4/15 carbine-length rail as a simpler, drop-in rail option. UTG is a company many airsofters have heard of, and lately the quality of their products seems to have been increasing. It’s still not something I would trust my life to, but this little two-piece quad rail is a great value for our particular application.

Removing the existing handguards can be a little tough if your D-Ring is being stubborn. They make a tool specifically for this, but using the handles on a pair of pliers does the job almost as easily. The two part rail didn’t exactly “drop-in” but I managed to get it installed with a bit of force. UTG includes a set of rail covers, but I replaced them with ladders to minimize bulk. Sheesh, why are these things so expensive? I was pretty tired at this point, and wound up cutting one of the ladders too short… Measure twice. Cut once. Although they’re always branded as Magpul online, the ladders I receive have been marked on the back with the URL ergogrips.net.

Magpul will be recurring theme here, as I (along with many others) find that these products have excellent value and functionality. You can commonly find Magpul products in four colors; Black, Olive Drab, Foliage Green and Flat Dark Earth. You can also find accessories in Urban Dark Earth, which is an exclusive for Larue Tactical.

Black looks sleek but does not camouflage well, Olive Drab felt outdated and Flat Dark Earth is too trendy right now. Foliage green it is! 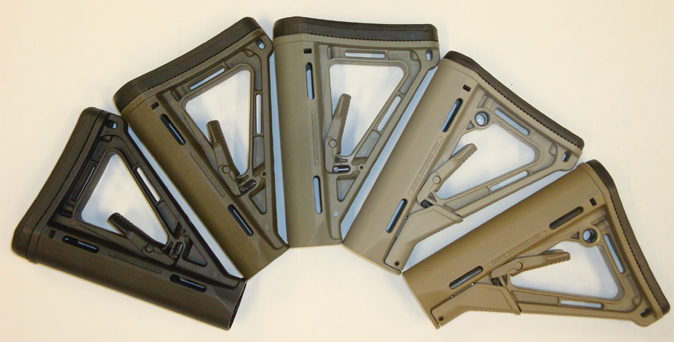 Magpul makes some fantastic stocks, one of the most ubiquitous being the original MOE which is what I installed on the rifle. The only gripe I have with the MOE is the moderate amount of wobble the stock has when extended. It really detracts from the solid feeling you want in a firearm – so much so that Magpul introduced the engenious friction lock which eliminates this problem. For an extra twenty bucks you can get the CTR, which is similar to the MOE but features the friction lock and a QD sling attachment point.

The MOE comes with a butt-stock butt-pad (it’s really hard plastic though) on the order of about .30″ thick. I replaced that with the Enhanced Rubber Butt-Pad™ which comes in at .70″. This provides a little extra eye relief but isn’t as squishy as it looks.

The LM4 has a mil-spec buffer tube, although the end is slanted (which is normally indicative of commercial diameter tubes).

Magpul’s MBUS flip up sights are a cost effective, durable option for back up sights. I was impressed when I first took these out of the package, they’re more substantial than they look. I enjoy shooting with irons, so optics aren’t yet a priority. I may look into UTG again when it’s time to find an Aimpoint alternative on a budget.

Magpul also produces a few very popular handgrips, and now I know why. In terms of ergonomics, the basic MOE grip is a tremendous improvement over the stock handgrip. It has a better texture, is larger in diameter, and features a beaver-tail that keeps your hand from rubbing on the receiver. The MOE+ is another similar option that features a grippier rubber overmolding. I felt as though the standard polymer would be a bit more stream-lined and reactionary, if not quite as comfortable.

The grip installed with only a small caveat – the screw which attaches the grip on the KWA has a smaller head than it’s mil-spec equivalent, small enough that it could potentially tear through the larger hole in the bottom of the MOE grip. This was remedied by installing a #10 washer in between the screw and grip.

While we’re ordering all this Magpul stuff, let’s throw on something else shall we? The MOE Trigger Guard provides a little more clearance (for use with gloves) than a straight trigger guard. But mostly it just looks a little bit cooler. There’s a polymer version and an aluminum version. I’ve never gotten into the plastic/metal debate – but I see no reason to go with aluminum in this case. Note: support your receiver while punching pins down here to avoid breaking your receiver’s “ears”.

The tiny set screw which secures the front end of the trigger guard was very difficult to screw in and it wound up stripping. Normally, I’m happy with stripping. But not when it’s tiny, hard to replace screws doing it. After slowly extracting the 1/16″ screw with locking pliers and finding a replacement, I took more time to slowly pre-thread the holes in both the receiver and trigger guard with the set screw by screwing it in slowly and periodically backing it out a bit before continuing.

Finally, it was time to finish her off. I couldn’t put the flash hider back on – because I had broken off the threads of the outer barrel while trying to unscrew it the wrong way. (Twice. Still don’t wanna talk about it). Luckily, the LM4’s outer barrel is divided into two sections, the front of which unscrews just in front of the gas block. You can buy a replacement from the KWA Pro shop, but I figured this was a good excuse to put put an alternative barrel extension on there. With use of a heat gun (a hair dryer wasn’t cutting it) and a pair of channel lock pliers I was able to remove the front portion and expose the 14mm CCW threads. The pliers did a number on the front barrel though, so I would recommend a strap wrench and more heat if you plan on re-using it.

A lot of the mock suppressors I looked at were either quick detach (which I wanted to avoid with the extended inner barrel) or had the incorrect caliber printed on them. Eventually I found a 155mm Matrix barrel extension on Evike.com that seemed simple and functional enough, with trademarks that weren’t too silly. The one I got did not have an orange tip or padding on the inside (padding is becoming rare due to it’s legal ambiguity). After examining the front end more closely and realized I would need a short barrel extension to prevent the suppressor from running into the gas block’s bipod mount. The LM4’s stubby brother, the LM4C has just the right barrel length – but it’s all one piece and would require a substantial amount of dissasembly to replace. I wound up choosing the Matrix Extension Set. The finish doesn’t match the KWA outer barrel perfectly but it’s close enough. So another order and some waiting… (Evike does ship quickly to Oregon) and then… all done.

At least for now. It’s never really over, is it?

The removal of the flash hider didn’t go well for me. Just remember two things: remove the set screw first (it’s a tiny hex head) and then unscrew the flash hider clockwise (while looking down the muzzle). Why clockwise? I don’t know. What I do know is that if you try it counter-clockwise, you’ll break off the tip of your outer barrel. I managed to do this twice. I don’t wanna talk about it.

The gas block went a little smoother, although this is when I started running into problems with identifying the correct tools. The pins that secure the gas block are roll pins, so ideally one would use a “roll pin punch” to remove them. They’re also metric, I think. But I don’t have a complete set of metric roll pin punches in my toolbox, so I just went with standard punches. Which worked out okay. But it felt a little risky. The tolerances here are tight and I got a few things jammed in tight spaces.

Then I removed the gas tube, and re-installed it into the low-profile gas block. Then I realized I had done it backwards and re-re-installed it. After that I attempted to remove the barrel nut. This can be pretty tough. Things that help:

The barrel nut unscrews counter-clockwise, unlike that damned flash hider. Try using a mallet to tap the wrench in order to get started. Once you’ve got that off, you’re free to install any Airsoft-Spec rail system. Or, in my case, free to re-install everything and start over from the top.

6 thoughts on “Misadventures in Customizing the KWA LM4”